What are the Different Positions in Football? 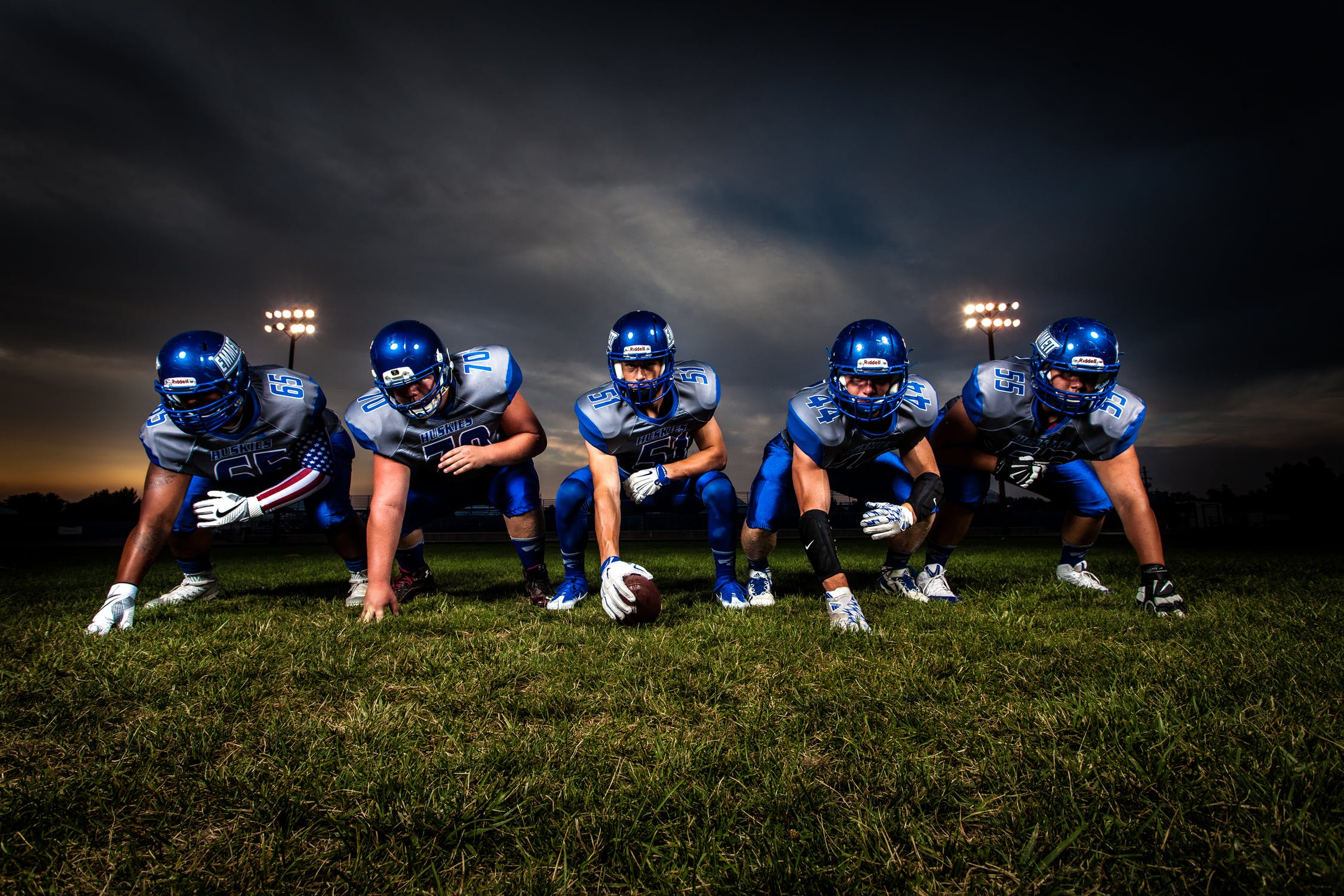 Do you want in on the excitement? With eleven players on each side of the field, it can be difficult for a new football fan to grasp the significance of each position, and how they work together. Over time, these positions have become highly specialized and every player knows exactly what to do at specific points in the game. The line of scrimmage divides the 2 teams, one of which is playing offensively, while the other is on defense. Read on to learn the basics about the various positions that make up one of America's favorite things—a football team.

The defense's objective is simple—keep the offense from scoring a touchdown. This is accomplished primarily by tackling and intercepting the ball. The best defensive players are able to anticipate what the offense wants to do, and stay a step ahead. There are common defensive schemes most teams adhere to, but the eleven defenders can line up anywhere they want. Let's take a look at the key defensive positions.

The first line of defense, defensive linemen are positioned directly across from the ball, which is on the offensive line. They wear jersey numbers 50-79 and 90-99.

Linebackers are positioned a couple of yards behind the defensive line. They're often expected to defend the run and the pass, and are generally the team's best tacklers. Their jersey numbers can range from 40-59 and 90-99.

The last line of defense, defensive backs are quick and sturdy enough to tackle players much bigger than them. Their jersey numbers are between 20-49.

Set, hike! The offense wants to score—whatever it takes! Kicking field goals, moving the ball down the field, and landing touchdowns all require a strong offensive team that's mastered their unique responsibilities. Without further ado, let's get into the key offensive positions.

The quarterback (QB) is the head honcho, positioned behind the center. They call the play in the huddle, the signals at the line of scrimmage, and they receive the ball from the center to throw to the receiver. The ideal quarterback has strong leadership skills, brains, and an especially gifted arm. Their jersey numbers are 1-19.

Typically the most hulking players on the field, the 5 offensive linemen block for the ball carrier. They're positioned along the line of scrimmage in jersey numbers 50-79.

Running backs' (RB) jerseys are numbers 20-49. They're lined up in backfield, but they aren't required to stay behind the offensive line. There are several different terms associated with running backs, but we'll look at the 2 main types.

Tight ends (TE) serve as both receivers and blockers. Typically positioned either to the right of the tackle, or to the left of the quarterback, the tight end can act as another wide receiver. They wear jersey numbers 40-49, or 80 and 89.

With a speed comparable only to the defensive cornerbacks, wide receivers (WR) try to elude defenders and catch the ball while running downfield. There are 2-4 wide receivers for every play, some splitting wide while others stick closer to backfield. Their jersey numbers are 10-19 and 80-89.

When it comes to field goals, kickoffs, and extra points, a specialized group of players take the field. Let's check out who belongs to the kicking unit.

With the ball poised on a tee that holds it upright, the kicker sends it through the field goal (hopefully) or soaring across the field. They're tagged in for all 3 situations mentioned above: field goals, kickoffs, and extra points. There's also a kick returner, often one of the fastest players on the team, who chooses to either run the ball, or down it by taking a knee so the offense can take possession at its own 35 yard line.

When the offense is short of the line to gain and has reached the fourth down, they can decide to punt the ball, rather than go for a first down. In this case, the punting team heads to the field where the punter receives the snapped ball from the center and kicks it to the punt returner who is waiting downfield.

In the case of a kickoff, gunners specialize in running downfield to tackle the kick returner before anyone else gets there. They do have to watch out for one player in particular, though, and that's the jammer, whose sole job is to slow down the gunner.

We hope this helped shed some light on the positions of football. Are you a football player who needs prescription football glasses? Done. When you shop with us, you’ll find video guides and tooltips throughout the build process as you customize the perfect pair. An answer to all your questions is at your fingertips, and if you want to chat with an expert, Contact Us. We’ll put you in touch with one of our friendly in-house opticians who can help you build your prescription football glasses.

Ditch risky online shopping with the See Better Guarantee. Try your football glasses for 45 days. If you’re not satisfied, send them back. Get a full refund, exchange, or credit towards a better pair. And return shipping? Covered. Get your pair of prescription football glasses at SportRx today!