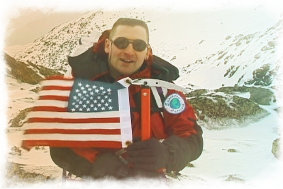 Michael Coyne is a longtime SportRxer and team leader at Expedition Outreach, an environmentally-conscious group on a mission to raise money and awareness for charitable organizations through extreme sports and mountaineering expeditions. Expedition Outreach was founded in 1996 by Michael and his wife Serenity, and is comprised of world class athletes who use their expeditions as a platform to promote peace and humanitarian efforts. 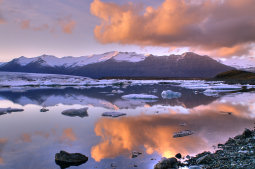 Michael is like many athletes with “less than perfect vision.” As an athlete, it took a lot for him to embrace the fact that he needed to wear glasses. He struggled to find prescription eyewear that would work for him. He searched for years to find a place that would make him what he needed - prescription mountaineering sunglasses that could withstand the rigorousness of his expeditions. His search came to an end when he found SportRx. Michael picked out glasses in two of his favorite brands, Oakley and Wiley X, and was so impressed by the optical quality and crisp vision in his new mountaineering glasses that he bragged to his optometrist about his experience.

In his own words, here is what Michael has learned from his expeditions and the importance of proper eyewear: 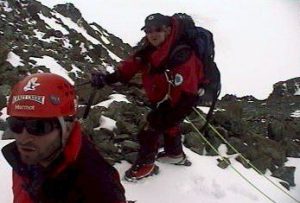 “Every expedition has taught me something, sometimes it's about a particular culture or country, but more often it's something about myself. I never felt more accomplished than when I stood on the summit of Mount Hope knowing that I had explored a place no one else had ever been to, or more afraid than when I was in the Tonsina River fighting for my life in a river of white water...

Eyewear is not generally thought of as a performance enhancement, but it is. Just like taking the right supplements and hydration, having the right backpack and using trekking poles in a sense, your eye wear is THE factor for performance. We don't usually think about our vision until something goes wrong. If there is one thing that I could wish upon the world, and I wish many things for all, is that they could see the world as I have, this is at the very heart of Expedition Outreach; this is my vision."

Vision isn’t the only obstacle Michael has overcome. A few years ago, Michael survived massive heart failure caused by the resulting apnea from a head injury he sustained while on duty as a State Trooper in Massachusetts. A man tried to kill him because of the uniform he was wearing, and it was thought to have left Michael unable to climb or dive again – two of the things he loved doing most in this world. Even worse, Michael was told he only had five years left to live.

Michael has since bounced back and uses his training to inspire and evoke the resilient spirit in others who are facing adversity in their own lives. To connect with Michael and the Expedition Outreach team, contact them here.