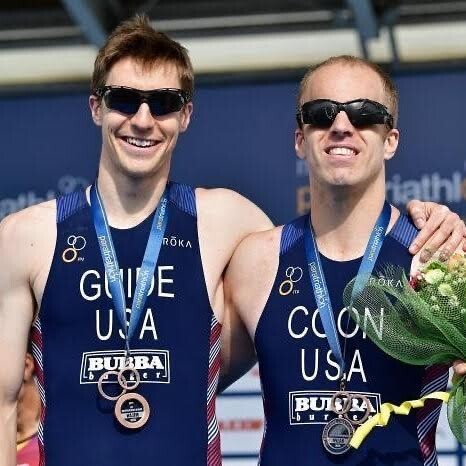 Hello SportRx fans, friends, family, athletes, we're so happy you made it back for another recap of Happy Hour Live with Graham. This week Zack Goodman joined in. He gives us the low down on some of his Triathalon racing and time working with Paralympic hopeful Kyle Coon. Read on below to get to know more about this awesome man and athlete. 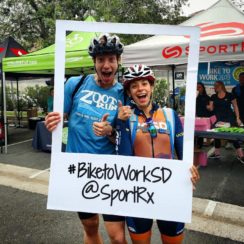 G: As a little bit of an intro for those tuning in. This is Zack Goodman, he's a very busy man; he's a triathlete, he's doing his PhD at UCSD, he's part of UCSD Tri team there and we met through the Sand Diego Bike Club, which is the oldest one down here, and just as a little back story. Zack and I met at a little bike race camp during wintertime and didn't know him but my first impression was this guy is really fast going up hills

Z: That's hilarious! My first impression of you was when we were going up the coast, which is flat, and then we make a right turn and you just go! And everyone is trying to catch your wheel and no one is capable. So we get like 5 guys, all drafting behind each other trying to catch up to you. And then right at the peak, you start to feel it, you're going 10 minutes max effort. Oh man, yeah that was a fun camp.

G: Yeah I destroyed myself for that entire camp in that first climb. I had to pay for it for the next 2 days. So yes I remember that well.

But let's dive into how you got into endurance sports and the tri world, to begin with?

Z: So in America, it seems like most triathletes started as swimmers or runners but basically no one here bikes as a kid, youth cycling isn't that big in the US. So I came from swimming, a pretty intense swimmer, like 9 practices a week, in the water, then another 3 outside of the water. I was planning to swim for the college I went to, NC state. Then, of course, the year I went to NC state they went from being unranked to 7th in the country. So that dream got squashed real quick. But fortunately, I did keep swimming on the club team and I started running a little bit.

Here's a funny story about running at NC state. There's this race challenge called the Krispy Kreme Challenge. Basically is a giant fundraiser, 8,000 people a year that do it. You start at the campus, run 2 and 1/2 miles to the Krispy Kreme, eat a dozen donuts as fast as you can, and then you run back. So 5 miles, 12 donuts and you're supposed to finish in an hour. My goal by senior year was to place in the top 10 or so in that event. So I was training running a little bit, just for the KK challenge. Then at some point, I got a bike to start biking to campus and I really loved biking so I did it more and more. So eventually I joined the Tri Club and then I got hooked. So 7 years since then and I'm still doing Triathalon today.

G: Well you've moved to the perfect place to train and compete.

Z: Yeah if you look at where I applied to grad school, I pretty much only applied to warm schools because I knew I wanted to be somewhere where I could bike all the time.

G: Makes sense, and from what I know about the tri-community, a lot of people move here because of the conditions. Not that NC is a bad place with extreme weather but they definitely have bad days. I played ball there so I know that summer days can be very hot and winter it can snow, so yeah real tricky.

So now let's talk about your balance of being a masters student and the load with getting your PhD and econ and trying to train to go compete as a triathlete and road cyclist.

Z: Yeah its a lot but you know, at least training is fun because if it's not fun you're just working all the time and training. So both take a lot of time, I have to find a way to fit both and my rule is don't start a new video game, Netflix series so that way I don't spend much time doing other things that are not training or working towards my thesis. But the PhD program is a 5-year program for most students. The first 2 years you're pretty much-taking courses which are the master's portion of the program and then the remaining years you try to finish your thesis.

So my thesis is the economics of health behaviors. So I look at policies that the government passes and how people change what they eat and how much exercise they do in response to these policies. So I try to treat my research like it's a full-time job, and I try to work relatively normal hours. But then I'll do a workout before or after work, or sometimes both.

With triathlon, it's interesting because 2 of those sports involve your legs, 1 doesn't so I try to do a leg oriented exercise at least 6 days a week which gives me 1 day to totally relax my legs and recover. Swimming though I can pretty much do any day but the benefits are small if you do it too much. So I don't swim more than every other day. And recently since the pools have been closed I swim maybe once a week in the ocean. So that's enough to maintain, not get much faster.

G: Sounds like an intricate balancing act, regardless. It makes me wonder between those two things, which do you spend more time doing? Work for your school and thesis or training(for sport)?

Z: So my official answer is definitely my thesis, for sure, 100%. I think it can vary from week to week. There can be weeks when I'm on a roll with research and I can go on and on, til 3 in the morning trying to get some data cleaned and running some regressions and the data analytics software seeing what will happen with the numbers. Then there are the days when you get to 2 am and you aren't making any progress and you're like well its 70 degrees outside and beautiful weather, let's go for a bike ride! And hopefully, when I get to clear my mind I'll be able to get something done.

G: It's amazing, I feel like a lot of people that do endurance sports, that's their thing, their meditative place to go.

What would you say is the hardest thing you've done with the 3 sports? During training or competition.

Z: So in terms of like suffering, I did Ironman Canada in 2018 and I basically trained leading up that only in San Diego, where the weather is never hotter than 80 degrees. Then on race day, even though it was in Canada, which is north of us, it was 95 degrees. It was 95 for the entire bike ride and the marathon and I had never experienced heat like that. So about halfway through the marathon, I think I had gotten rid of all the salt in my body. I was trying to eat as much salt as I could, I could see it on my body. The salt as my sweat was evaporating. Then the cramps started and they did not stop. So I ran the second half of this marathon with these cramps that would just not let up at all. By the last 2 miles, I could barely hold a walking pace. I was in so much pain. So yeah I was really glad to finish that race. That was a very very painful race, and probably one of the hardest I've ever done.

But I also did a bike ride that started in Washington State that finished on the other coast in Maryland. That was hard in the sense that it seemed like a lot, the planning and mentally thinking about the days ahead of long bike rides. But the actual bike ride itself was really pleasant because I wasn't going fast. I was trying to enjoy myself and take in nature and the beauty of our country as I was riding through it.

G: That's incredible, how many miles is that?

Z: 4000 miles. There's a route that this organization called The Adventure Cycling Assoc. that put together these routes that transverse across the country. I didn't follow it exactly but did for about 2/3 of the way and then I diverted south to go to Maryland. I zig-zagged a bit to hit as many National Parks I could, along the way. So I think in total it was about 4000 miles and it took 40 days. Average a century a day.

"By the end, it was probably the fittest I'd ever been on the bike. I had lost about 10 pounds but not because I was eating healthy. If you spend 40 days on a bike, you're going to get stronger"

G: So you work with Paralympic Hopeful Kyle Coon. Tell us about your work with him?

Z: Yeah this world is super interesting. So Kyle lost his sight at the age of 6. He had a rare form of eye cancer but even though he had his eyes removed he still wanted to do sports. So he started with rock climbing and he did very well, I think he was state-ranked. Then at some point, he started biking and became a pretty solid cyclist. One of his friends challenged him to do a triathlon and he absolutely just fell in love with the sport. So Kyle is the 3rd fastest, by ranking, visually impaired para-triathlete in the United States and top 12 in the world. So he's hopeful for the Paralympics and he's neck and neck for the country. There are only 2 slots for the country so he's right there. So should we ever get to race again, he can demonstrate what he's got.

Zack and Kyle met at a camp that's geared towards training visually impaired hopeful triathletes. Zack was volunteering at the camp as a guide. Amy Dickson, the woman who runs the camp, brought the two together to start training. They had an instant connection, "great energy" Zack said. Their first race was in Florida and since then they've traveled all over the world to race. 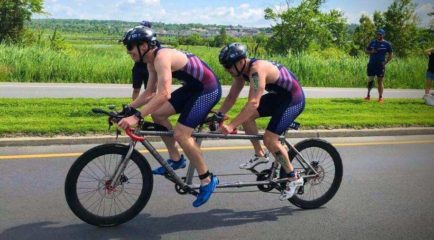 "The synergy between the racer and your guide really matters"

Z: Just one last thing a shoutout to SportRx's beer! I know this is our happy hour, so I came prepared. I have right here, SportRx Barley Visible which is the pun of the century. What a great beer name! Whoever named it right on! and whoever brewed it, also right on! Its super-smooth, easy to drink. It's the kind of beer you want to drink after work and relax a bit, have a chill beer.

Thanks for reading along and getting to know Zack Goodman. Til next Friday our friends.